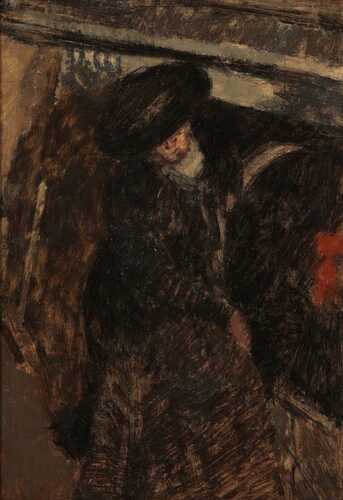 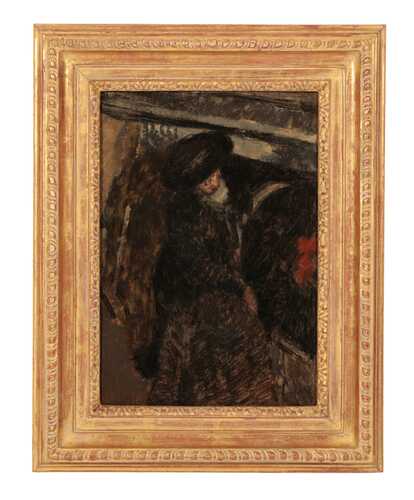 The title of this work is borrowed from the larger painting, first exhibited by Sickert at the New English Art Club in the summer of 1908 as ‘The New Home’, a painting that was the key work in a sequence featuring the ‘two divine coster girls’ whom Sickert described in a letter written early in 1908 to his friend, the American-born painter, Anna Hope (Nan) Hudson,. As Sickert told Miss Hudson, his models were dressed “in the sumptuous poverty of their class, sham velvet &c. They always wearing for everyday dirty, old, worn clothes, but Sunday clothes. Extraordinary lives. Men, who live on them, now & again hitting them with ‘ammers, putting poisonous powders on cakes, trying to cut their throats, drugging their whisky &c.”

The two models were usually painted separately, the ‘New Home’ model with a round face, while the model in the in the misleadingly titled L’Americaine (Tate) has a slimmer face.

The painting offered here, along with another small oil sketch of the two Coster girls together, has an interesting history. The Bloomsbury artist Vanessa Bell discovered them in Sickert’s old studio at 8 Fitzroy Street after Duncan Grant had moved into the space in 1920. Presumably, she told Sickert about her find and he – ever careless about the after life of his paintings – told her to keep them. The paintings were inherited by Angelica Garnett, Vanessa Bell’s daughter, and were included in her sale at Christie’s, 21 November 1969.

Duke's are grateful to Wendy Baron for confirming the authenticity of this work, and for providing  the additional information above.