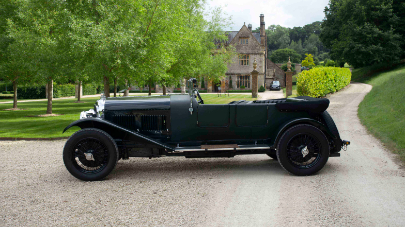 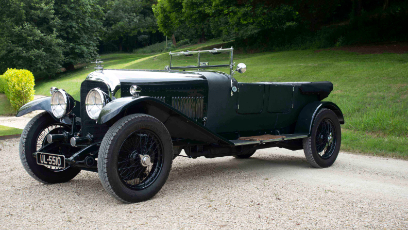 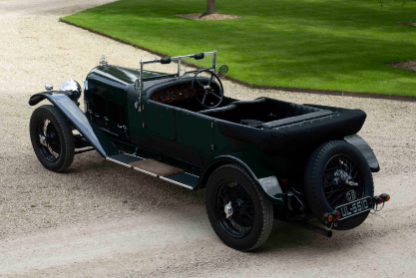 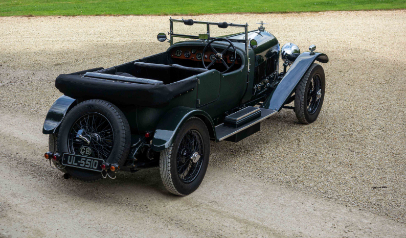 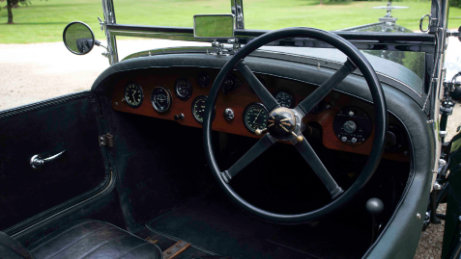 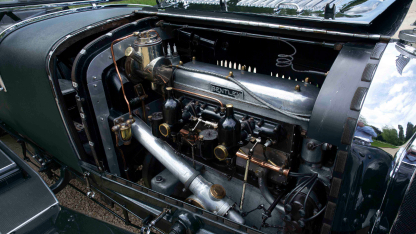 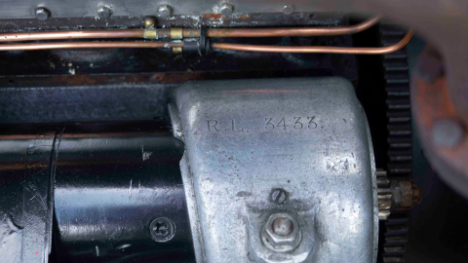 In 1919, at the Olympia Motor Exhibition, W O Bentley introduced to the world his new 3-litre racing car. The descendants of this British Racing Green, leather-strapped “Lorry”, would go forward and become some of the most successful and widely recognised legends of motor racing.

The 3-litre Bentley had early racing successes, but by mid-decade it became apparent development was necessary. This resulted in the creation of the new 4 ½ Litre engine. Bentley first tested production of this engine in a 1927 Le Mans practice car. Utilising the chassis, transmission, and brakes of the 3-litre, combined with this newly developed four-cylinder motor. Later that year the engine was fitted to the first production 4 ½ litre chassis, which was to compete in the Grand Prix d’Endurance. ‘Old Mother Gun’, as it was known, was eliminated in the famous White House Crash. A year later in 1928, Woolf Barnato and Bernard Rubin, drove the same ‘Old Mother Gun’ to a famous 24 hour Le Mans victory. The pinnacle moment from a series of highly successful competitive years. With their racing pedigree cemented, they became world renowned for their speed and rugged capability. This reputation has only grown, and they have been raced and collected in every subsequent generation; supported by a wide and passionate circle of specialists and mechanics.

Only 665 examples of the Bentley 4 ½ litre were ever made, over a short period of four years. RL3431 is a rare example of a matching numbers car, with all its major mechanical parts identifiable by original manufacturers numbers. She was first supplied to Geoffrey Joel in 1929 and still retains the open touring coachwork design by Vanden Plas, of the attractive Long Bonnet shape. Joel had a close connection to Bentley from the start, not only did he finance Bentley Motors, but he was also the cousin of Woolf Barnato of “Bentley Boys” fame. The second owner was a Mr C E A Flewitt, who was known to race Bentley cars; we have a picture of him at the Shelsley Walsh Hill Climb.

The third owner of this 4 ½ litre was a Lt Col Mir Haider Khan, who exported the car to India. This could have been very early in its life, the car was never registered for road use in the UK, so perhaps even in the early 1930’s. It then fascinatingly disappeared for a considerable time, to be next discovered in Afghanistan in 1971, in the possession of Hassan Hamid. After some necessary restoration carried out to a very high standard in Hamid’s factory, the owner employed his friend and member of the Bentley Drivers Club, Lt T N Allan of the RAF, to drive the car back to England. After aiding the preparations of the vehicle, Mr Allan took four weeks and over 5,700 miles to complete this remarkable expedition, the car suffering no serious problems. The story is fantastic, involving Land Rover windscreen wipers, prison time and many a slow puncture. The journey is fully documented in an article in the Bentley Drivers Club Review. This achievement is a serious testament to the durability and mechanical prowess of the vehicle. Mr Allan was to comment on ‘the incredible soundness of design, the longevity and strength of W. O.’s great cars’.

After its return RL3431 was housed by Jaguar Development engineer Julian Ghosh, until 1976, when it was once again looked after by Tim Allan. The car was then bought by a Mr David Hodgson, who instructed a comprehensive rebuild of the car, to be undertaken by the very highly regarded specialist in the field, John Ambler. The well documented work included a full engine rebuild, with a full flow lubrication system and the fitting of a new overdrive. There is a good collection of photos documenting the rebuild. Recently Dr Clare Hay has written a statement on the bodywork.

Ever since joining the BDC the current owner and our vendor has been made aware that the Bentley WO’s are the zenith of the Bentley brand. They are the cars all serious collectors should aspire to, and only when in possession of one, can you fully be deemed a true devotee. The sale of this stunning example is an opportunity for the right person to become part of the great British Bentley legacy.