Previous
Back to auction
Next
Important Notice
Please note there is no Live Bidding through our Website - All live bidding is through our partners www.the-saleroom.com/dukes and https://www.easyliveauction.com/dukes/
Sale commences with lot 9 at 11.30am 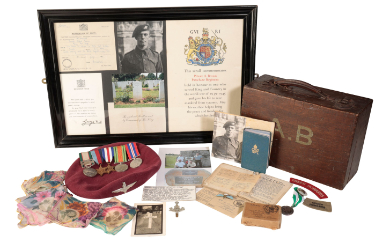 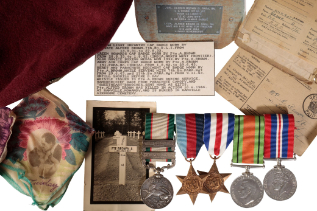 who was sadly killed by a sniper at Ranville, Normandy.

Original Parachute Regiment Beret. This was given to his wife by the recipient before he returned from a leave in 1943. Brown’s Granddaughter stated that his parting words were, ‘ You keep hold of this because I won’t be back’

A box of silks handkerchiefs sent to his wife.

Photograph of his original grave.

A frame containing his original Memorial Scroll, the telegram informing his wife of his death, Buckingham palace slip and photograph of his grave.

With recent photographs showing a memorial plaque to brown, close to the spot where he was killed by a sniper

Indian General Service Medal North West Frontier 1936-37 and 1937-39 to 4449027 Pte A Brown 2nd BTN Green Howards ( An original medal however, skimmed and unofficially named, the original sadly lost. His entitlement to the medal is confirmed on the medal roll)

Alfred Brown was born in Millfield, Sunderland, Durham in 1913. He served in the Durham Light Infantry from 13th May 1931 to 27th August 1933. He subsequently served transferred to the Yorkshire Regiment and saw active service on the Northwest Frontier.

Brown passed the rigorous Parachute Regiment course and joined the 7th Bn, transferring to the 13th in preparation for Operation Overlord. He jumped into Normandy on D - Day and was sadly killed in action by a Sniper on 10th June 1944 at Ranville. The local villagers erected a plaque close to the spot he was killed; it reads ' L/Cpl Alfred brown 13. Para BN Gave his life here for Freedom. 10th June 1944. Always Remembered'

Arthur was laid to rest in Ranville Cemetery. His wife was pregnant when he was killed, which caused early labour; they had been married for a little over a year. She never remarried.