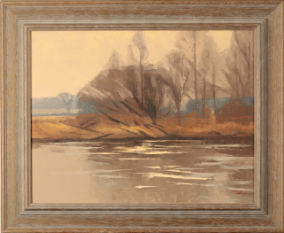 James Fry was originally from Purbeck and lived at his studio in Corfe Castle, Dorset. He was a prolific painter, mainly in oils on board and was known for often travelling around the area on his bicycle painting numerous scenes of heathland, cliffs and the sea.