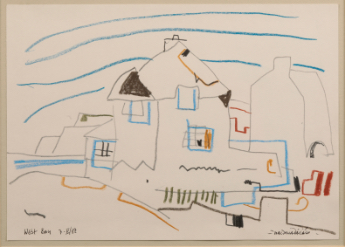 Mac Miadhachain (pronounced mac-mee-a-hon) was born in Downpatrick, Co. Down Northern Ireland in 1929. He painted widely in Ireland, Cuba, Mexico, South America, Morocco, USA, Western and Eastern Europe, North Africa and the Middle East and Central Asia, but Dorset was his greatest passion and inspiration, and he spent over 60 years living in Swanage, on the beautiful Isle of Purbeck.