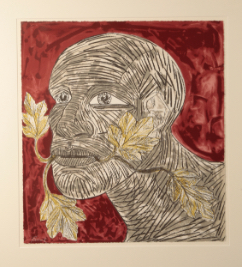 (Wiseman 161), signed in white chalk and numbered 2/5 and initialled H.C. in pencil, Hors d Commerce proof screenprint, printed in colours to the sheet edges, on Somerset textured paper, published by Curwen Chilford Prints, with their blindstamp and that of the printer Kip Gresham, 57cm x 53cm

Born in 1930, Frink is amongst the most notable artists of the last century whose works continue to be widely exhibited in public and private collections throughout the world. In 1969 Frink was awarded a CBE and in 1971 she was elected an Associate of the Royal Academy. During the decade of 1982-1992 she was awarded a DBE, had a solo exhibition at the Royal Academy and was awarded a Companion of Honour.

Elisabeth Frink lived and worked at Woolland, Dorset from 1977 up until her death aged 63 in 1993, and her studio there bore witness to over a decade of prolific drawing and sculpting.