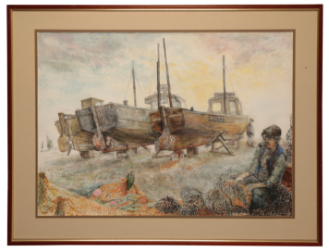 Gill Moores (nee Rowe) graduated from the Slade in the late fifties and worked as a commercial artist and teacher. Moving to Dorset in the seventies, the landscape and buildings of the county became her subject matter. Her collected works were on display at the Moores Biscuits site in Morcombelake for many years.