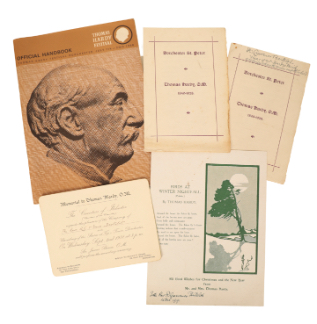 with country snowscene and printed with a seasonal poem "Birds at Nightfall" by Thomas Hardy, address to MS; two Orders of Service at Dorchester St. Peter following Hardy's death; an invitation card for the unveiling of the Thomas Hardy statue at Top o'Town 2nd September 1931; and an official handbook for the Thomas Hardy Festival in Dorchester July 1968 (5)