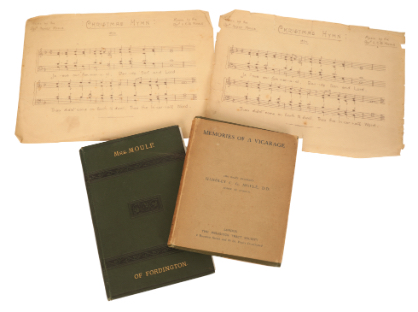 REV. MOULE OF FORDINGTON, DORCHESTER: "Memories of a Vicarage"

Handley CG Mould DD, London, The Religious Tract Society, 1913, a gift from Moule (then Bishop of Durham) in 1918 to his successor a Vicar of Fordington Rev. R.G. Bartelot, including a letter from Mrs Moule and Moule's licence as Curate at Fordington 1869; "A Brief Memorial of Mrs Moule of Fordington", W. Poole, London and Henry Ling, Dorchester, 1877, Anon. 1st edition; and two copies of "Christmas Hymn 1874, words and music by Rev. HCG Moule (a lot)