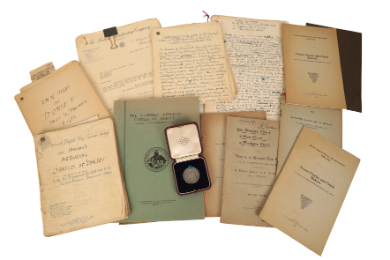 including: "The Prebendal Church of Saint George at Fordington: Notes on its medieval floor tiles" (2 copies); "The Vanished Medieval Castles of Dorset" (2 copies), his original manuscript of the essay and medal for winning the Mansell Pleydell Essay Prize for 1942; "Dorset Clocks and Clockmakers" (2 copies); Old Clocks and Watches and their Maker"Old Clocks of Wessex"; "Fourteenth Century Life in Bridport", four

typed manuscripts of talks for the BBC, broadcast 1924; copy of a monograph and various correspondence;  and three other manuscripts (a lot)