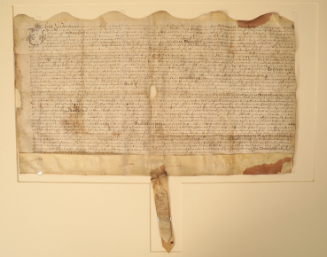 detailing the transfer of an estate between a Brune Dackombe of Corfe Castle and a John Voegt, ink on vellum, mounted on card

The Dackombe family were prominent Corfe citizens acquiring considerable estates in the Isle of Purbeck and elsewhere by the marriage of Thomas, second son of John Dackombe of Stepleton and Sybil, and Elizabeth, daughter and heiress of Richard Clavyle (Clavell) of Corfe Castle, in about 1500. Elizabeth was born in 1486 and died 1528, predeceasing her husband by thirteen years - Thomas dying in 1541. Elizabeth's maternal grandfather was Stephan Keines and was entitled an Earl - this explains the fifth quartering in the Dackombe of Corfe's Arms i.e. 5 Quarterly i &amp; iv: Argent on a chevron sable three caps of maintenance. Caps of maintenance were only granted to earls. Robert, born in 1521, was heir to both his mother's and his father's estates.

The Corfe Pedigree shows a reasonably uncomplicated descent until Edward Dackombe, son and heir of William and Mary, who married, first, Susan Turner by whom he had Robert and Mary. His second marriage to Anne, daughter of Henry Brune of Athelhampton, produced a son, Brune, born in 1617. Edward died in 1635 and bequeathed to Brune Dackombe his mansion house and farm in Corfe Castle for a term of 99 years, with the reversion to descend to his eldest son Robert. Robert settled all his estates on his sister Mary and her first husband, Thomas Morton. The residue of the term of years on the manor house and farm ultimately descended to Henry Dackombe, grandson of Brune, and was sold by him to John Morton - grandson of Mary and Thomas Morton. John Morton had by then become owner of the reversion as described. All of which is why the beautiful Elizabethan manor house which is now a hotel is called Morton House, but was, formerly, Dackombes.

Athelhampton manor house, has stained glass heraldic arms incorporated in its windows; two of which carry the Dackombe insignia. Brune Dackombe, who descended from this House, fought for the Royalist cause, and a short piece is devoted to him in this history. Edward, son of William and Mary was mayor in 1623 and M.P. at some time. His younger brother, Henry, also held this post in 1614 and 1621. Edward, son of Brune, was mayor in 1679; his duties were not discharged honourably and he was called to Parliament to answer a charge of 'miscarriages in the returning of Members during elections.' His son, Henry who was mayor in 1699, was accused of 'partiality' when vowing his favourite candidate would win regardless of the election. Like father, like son.