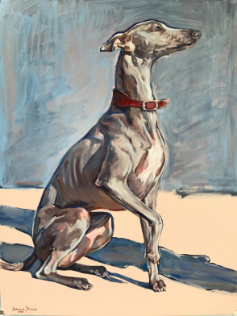 Jemma Phipps
Born in 1977, Jemma studied in Florence, and is a portrait painter working from her studio in Wiltshire. She works mainly in oils on canvas and charcoal on paper.
Jemma has work in the private collections of HM the Queen and other members of the Royal family and the Duke and Duchess of Devonshire at Chatsworth. She exhibited her portrait of HM the Queen for the Ascot Authority at the Royal Society of Portrait painters in 2006. She is still the youngest artist to have painted the Monarch. Her exhibitions include The Royal Society of Portrait Painters 2012, 2007, 2006, 2001, and The Summerleaze Gallery, Wiltshire 2009, 2002.