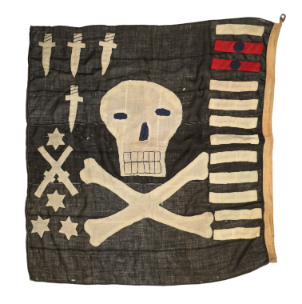 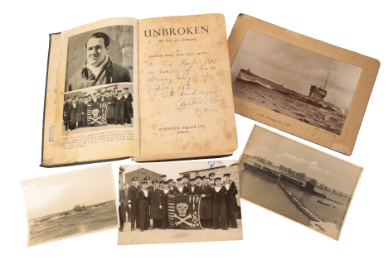 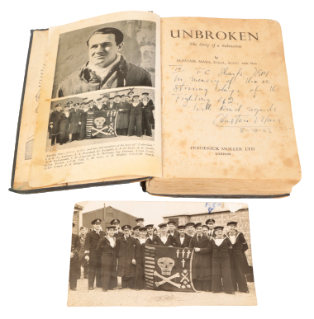 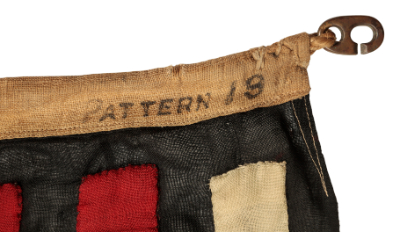 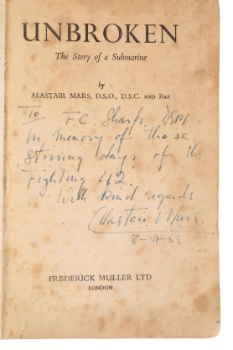 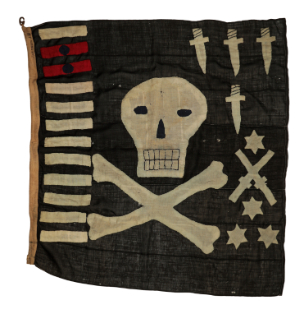 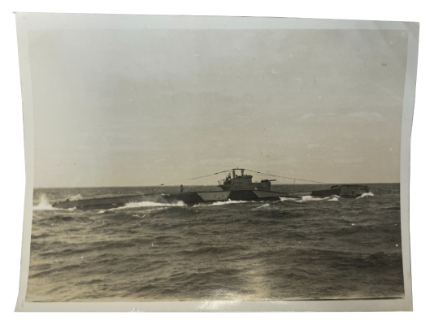 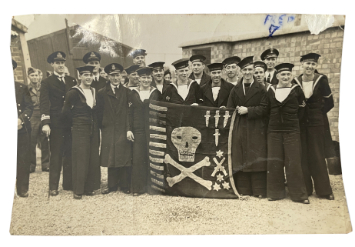 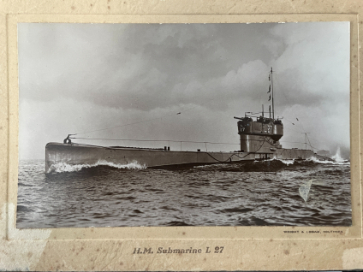 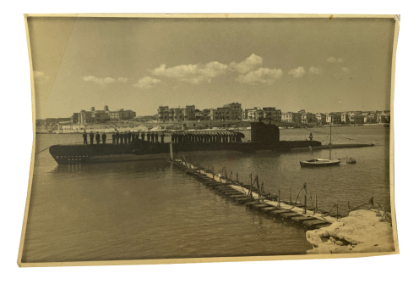 THE HISTORICALLY IMPORTANT 'JOLLY ROGER' FROM THE SUBMARINE HMS UNBROKEN.

The vessel conducted cloak and dagger operations involving members of the SOE under the command of Peter Churchill.

The flag is from the estate of Petty Officer F.C. Sharp DSM, who served on Unbroken.

On two occasions, she transported Captain Peter Churchill, D.S.O., to France. The first operation began on the 11th of April 1941, when Churchill, with three colleagues, boarded Unbroken. They were dropped off in the Bay of Antibes on the 20th of April, transported inland by Folboats. Churchill returned with a French resistance leader François d'Astier de La Vigerie, code name Bernard the same evening.

After joining the SOE, Churchill was again dropped off on the French coast by Unbroken on the 21st of  April 1942, landing at Cap d'Antibes. With him was Edward Zeff, the wireless operator for the Spruce Network. After taking Zeff and another agent ashore, Churchill returned to Unbroken and travelled back to England. Later in the war, Churchill and Zeff were captured during separate operations and sent to concentration camps. Both miraculously survived, having been horribly tortured and sentenced to death. Churchill was held in solitary confinement in the punishment block of Sachsenhausen for nearly a year. Zeff's survival was truly remarkable given the fact he was Jewish, he was sentenced to fifty lashes and then to be hung, but he escaped death after the intervention of a Nazi official. He was liberated from Mauthausen.

As part of the 10th Floitila, Unbroken spent much of the war in the Mediterranean operating out of Malta. She and the crew were very successful; significant damage was done to the Italian war effort when Unbroken badly damaged the Italian light cruiser Muzio Attendolo and the heavy cruiser Bolzano. Their loss during Operation Pedestal eased the enormous pressure on Malta.

It wasn't the first time Unbroken had hampered the Italians; earlier in the war, in July 1942, she attacked the main west coast railway line on the Italian mainland. Unfortunately, she suffered extensive damage and had to be repaired in Malta after receiving return fire from one of the shore batteries. However, that wasn't before causing enough damage to block the supply route for 24 hours.

Lieutenant Commander Mars wrote the history of Unbroken after the war. A copy dedicated to Sharp is sold alongside the flag, as are a number of original photographs. One of which shows the crew holding one of the flags that was on board.