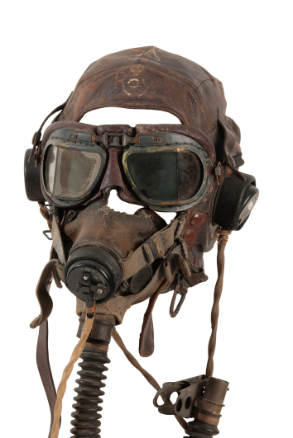 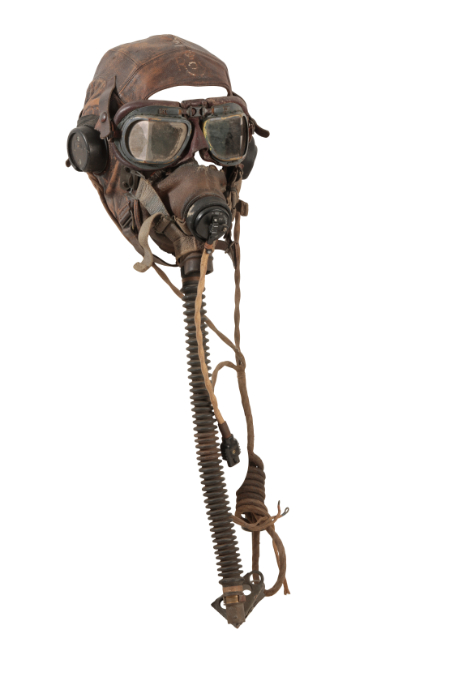 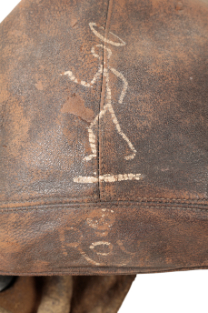 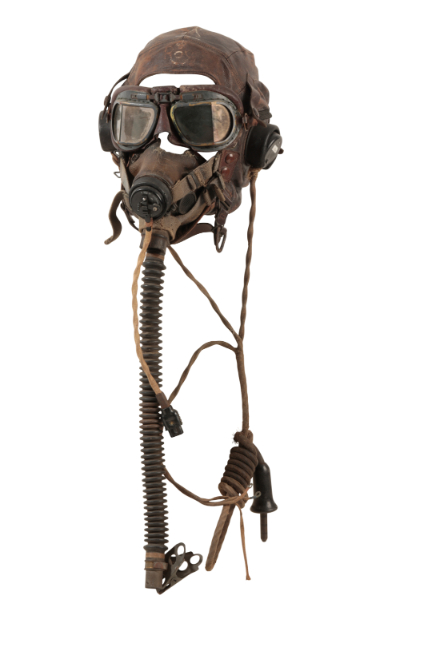 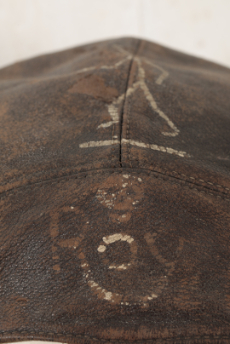 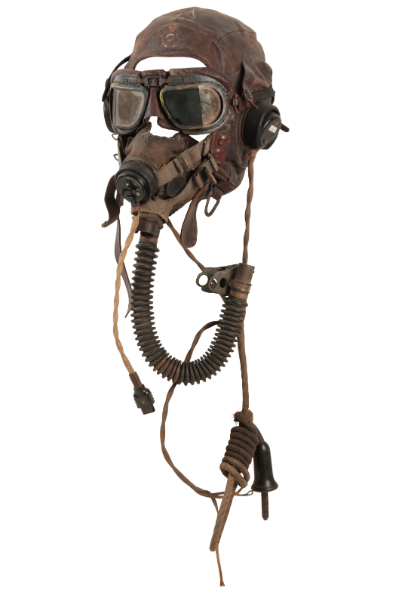 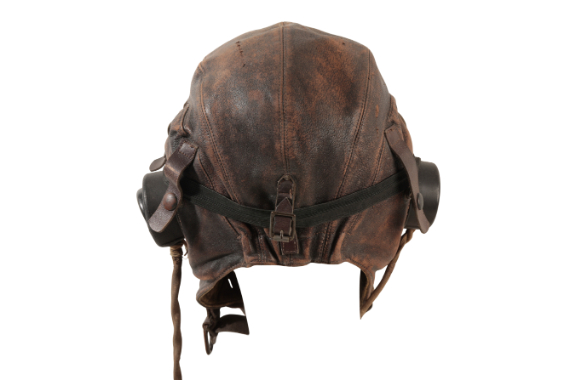 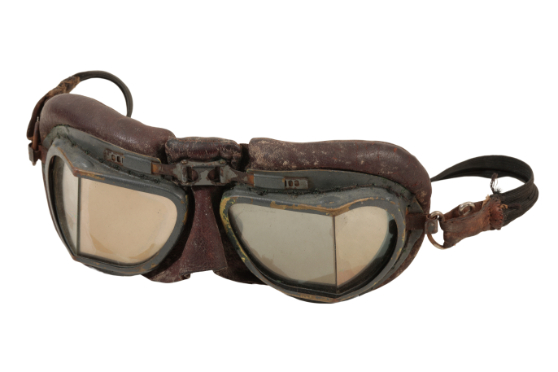 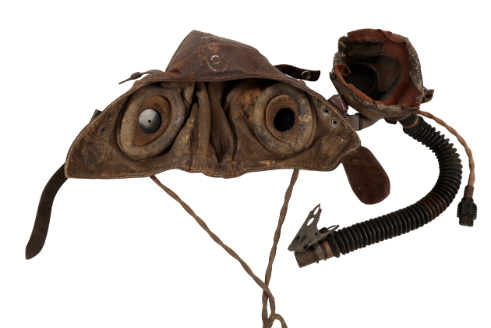 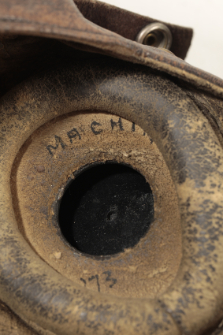 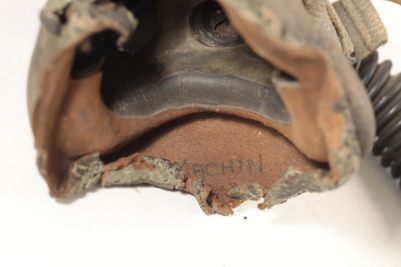 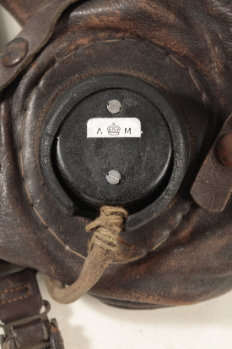 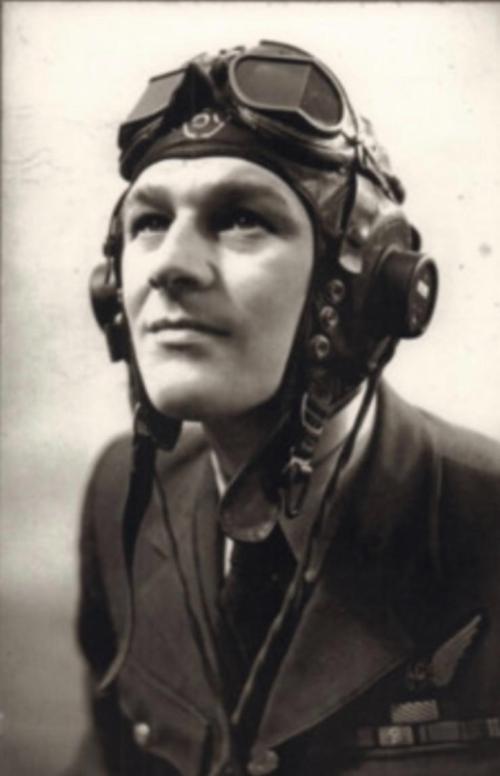 belonging to 1626273 SGT Roy Machin DFM of 617 Squadron, who took part in Operation Catechism, the sinking of the Tirpitz.

RAF C - Type Flying Helmet, with the original set of receivers Air Ministry stamped and the original plug. The helmet has a saint figure in white paint and Skull with the name Roy pained underneath. In each rubber, cup is written 'Machin'

WW2, RAF E Oxygen Mask. Air Ministry stamped 10A/12570, with original Oxygen Hose. The mask has some deterioration to the outer edges.

The inside chin area has ' Machin 273' written inside. 273 was the last three digits of Machin's service number.

Roy Machin was born on the 8th of June 1924 in Belper, Derbyshire. His father, George, had served in the Royal Field Artillery during the Great War. In civilian life, after leaving school, Roy took an apprenticeship as a Colliery Clerk. At the time of the 1939 census, he lived with his parents at 1 Pinfold Lands, Mexborough.

Roy joined the Royal Airforce and was given the service number 1626273. After training as an air gunner, he was posted to 49 Squadron in December 1943. His crew was made up of the following men:

The crew flew a total of 14 Operations with the Squadron. On their first operation, Machin, who was the mid-upper gunner and Briers, the rear gunner, engaged and likely shot down an enemy night fighter. In his oral interview with Peter Hart of the Imperial War Museum, Briers describes the incident.

On an Operation to Augsburg, their Lancaster was hit by fire. Possibly cannon shell from a night fighter or an overenthusiastic Lancaster gunner. The aircraft was badly damaged, and for his part in saving the Lancaster, Machin was awarded the Distinguished Flying Medal, the citation which was announced in the London Gazette on the 5th of May is below:

1299165 Sergeant Ralph Algernon BRIARS, Royal Air Force Volunteer Reserve, No. 49 Squadron. *578343 Sergeant Arthur WARD, Royal Air Force Volunteer Reserve, No. 49 Squadron. 1626273 Sergeant Roy MACHIN, Royal Air Force Volunteer Reserve, No. 49 Squadron. These airmen were rear gunner, wireless operator and mid-upper gunner, respectively, of an aircraft detailed to attack Augsburg one night in February 1944. When approaching the target, the aircraft was attacked by a fighter and sustained severe damage. The controls were affected, and the- bomber went into a steep dive. As the pilot and flight engineer endeavoured to regain control. Sergeants Briars, Machin and Ward directed their efforts towards extinguishing the fire. Bullets were exploding in the ammunition ducts, but completely ignoring this danger, they laboured strenuously to beat out the flames. As the task was accomplished, Sergeant Briars collapsed through lack of oxygen. Sergeant Machin promptly tended his comrade whilst Sergeant Ward returned to his turret, ready to defend his aircraft if again necessary. In the face of a most trying situation, these airmen maintained perfect discipline and displayed courage and resolution of a high order.

On the 12th of November 1944, Machin and his crew in Lancaster I. ME 562 (K) took part in Operation Catechism, the purpose being to destroy the German Battleship Tirpitz.

'Bombing Tirpitz. 1 x Tallboy. 0842 HRS. 14,000ft. Two bombs, one of which was ours, went down together, and both appeared to hit the edge of the ship near its centre. Bombing appeared generally concentrated. Only one wide bomb.'

The crew was photographed on return; Roy is pictured on the far left, smile on his face with a cigarette in hand.

Machin took part in the following operations with 617 Squadron:

Machin left the 617 in March 1945. In later life, he became a pub landlord in Mexborough, and he rarely spoke about his wartime service. Roy passed away in 2006.