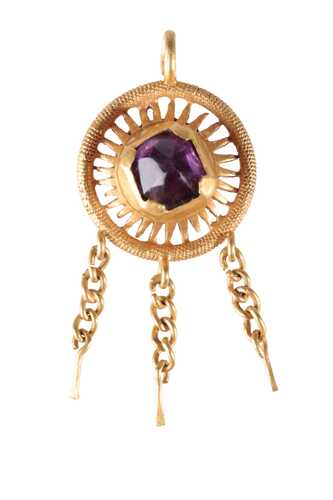 MEDIEVAL GOLD HAT JEWEL with a faceted amethyst in a pierced yellow gold mount emblematic of the sun in splendour (the personal emblem of Edward IV), with three chain drops below originally mounted with pearls. Provenance: Found in Horncastle, East Lindsey, Lincolnshire in June 2013 (treasure no. 2013 T466) On 2nd February 1461 The Houses of York and Lancaster fought at the Battle of Mortimer's Cross in Here-fordshire. As dawn broke three suns appeared in the morning sky. This was a rare meteorological phenomenon called a Parhelion caused by ice crystals in the atmosphere. Edward, The Earl of March, told his men this was a sign from God representing the Holy Trinity and was proof that God would lead them to victory. The Yorkists were victorious that day and Edward was proclaimed King a month later, after which he adopted the "Sunne in Splendour" as his personal emblem. The fact that the "Sunne in Splendour" features as the central motif in this extremely rare high-status hat jew-el suggests that it belonged to a courtier from the House of York. This remarkable piece of medieval jewellery may be compared to a roundel pendant from the Fishpool hoard and it is strikingly similar to a hat jewel worn by Edward IV in a portrait in the collection of the Musee Calvet, France. During the medieval period amethysts were worn into battle, because it was believed that they protected the wearer from harm. The colour of the stone also has royal connotations. The British Royal Sceptre, first used for the Coronation of James II (1633-1701) is adorned with an amethyst terminal surmounted by a cross.
Bidding ended. Lot is unsold.
I have a question