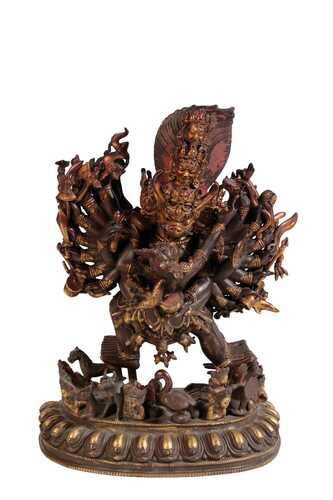 BRONZE FIGURE OF VAJRABHAIRAVA AND VAJRAVETALI, TIBET, the figure seen striding in alidhasana in embrace, he holding a skull cup and vajra in his primary hands and a multitude of accoutrements in the other hands, adorned with the sacred thread and a garland of severed heads, his bull's face flanked by six human faces and two above; she holding a skullcup and ceremonial knife and ornamented, with traces of polychrome paint, raised on a perspex base, 23cm high; sold together with possibly the original lotus base, 22cm wide
Bidding ended. Lot is unsold.
I have a question