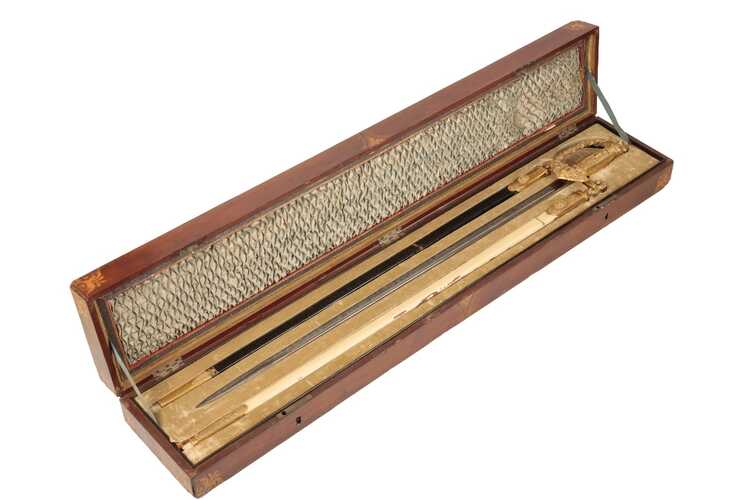 AN HISTORICALLY IMPORTANT GOLD PRESENTATION SWORD gifted in 1844 to Admiral of the Fleet George Sartorius GCB by Baldomero Espartero. For his service in Portugal, helping to establish Spanish Independence George Rose Sartorius was born in Bombay on 9 August 1790, the eldest son of Colonel John Conrad Sartorius. Sartorius started his career aged eleven under the command of Captain Sir Harry Burrard-Neale on the yacht Mary. He was a midshipman on board the frigates Fisgard and Naiad and saw action at the Battle of Trafalgar on 21 October 1805 on Tonnant. The vessel was severely damaged during the action, from the ships complement of seven hundred, over seventy were wounded. Sartorius was then posted to vessel Bahama, one of the Spanish prizes taken during the battle. On 5 March 1808, he was promoted to be Lieutenant of the Success. He participated in operations protecting the Greenland fisheries, and in assisting at the reduction of Ischia and Procida. Sartorius took part in Defence of Sicily against the threatened invasion of Murat. At the Defence of Cadiz, he was promoted to the rank of Commander on 1 February 1812. Service in the home waters followed. While in command of Slaney 20, Sartorius witnessed the surrender of Napoleon Bonaparte. The following extract is taken from Dictionary of National Biography, 1885-1900, Volume 50 by John Knox Laughton. 'In 1831 Sartorius was engaged by Dom Pedro to command the Portuguese regency fleet against Dom Miguel, and in that capacity obtained some marked successes over the usurper's forces. The difficulties he had to contend with were, however, very great; he was met by factious opposition from the Portuguese leaders; the supplies which had been promised him were not forthcoming, and his men were consequently mutinous or deserted at the earliest opportunity. Sartorius spent much of his own money in keeping them together and threatened to carry off the Fleet as a pledge for repayment. Dom Pedro sent two English officers on board the flagship with authority, one to arrest Sartorius and bring him on shore, the other to take command of the squadron. Sartorius, being warned, made prisoners of both as soon as they appeared on board, a summary measure which went far to conciliate his men. Such a state of things, however, could not last; and without regret, in June 1833, Sartorius handed over his disagreeable command to Captain Napier, who, warned by his predecessor's experience, refused to stir till the money payment was secured.' He had been struck off the Navy list due to service with Portuguese Fleet, his rank, however, was restored and he was Knighted in 1841. Sartorius last command was Malabar, which was based in the Mediterranean sea for three years. In 1843 he came to the aid of the American Frigate Missouri which caught fire off Gibraltar. Although it was lost, he received a special commendation from the president and Congress of the United States. In July of 1843, Baldomero Espartero was driven out of Spain by a Coup d'état. Sartorius received him on board the Malabar and gave him shelter. Likely for this act and his services in Portugal he was gifted a solid gold presentation sword by Espartero. The sword had been presented to Espartero by the Province of Santander. The Military & Naval Gazette dated Saturday 13 January 1844 announced; 'Captain Sir George Sartorius, of the Malabar, has been presented by Espartera with a handsome sword, in commemoration of Sir George's services in Portugal, which powerfully influenced the establishment of Spanish freedom. The sword was given to Espartero by the province of Santander' Along with his own dedication on the sword, Espartero had one added for Sartorius. Sartorius never served at sea again; he was promoted to Rear-admiral on 9 May 1849, Vice-Admiral 31 January. 1856, Admiral 11 February 1861; Vice-Admiral of the UK in 1869; Promoted to Admiral of the Fleet on 3 July 1869, K.C.B. 28 March 1865; G.C.B. 23 April 1880. He died on 13 April 1885. The inscription reads ' Al Admiral Sartorius ANO 1843' With Espartero's reading ' La Provincia De Santander Al General Espartero El Duque' and ' Vencedor De Ramales Guardamino En 1839. The sword is and is 89cm in length. The handle is hallmarked Gold. Complete with two scabbards, each with hallmarked gold fittings. The sword is contained in a box with a plaque to ' Al Admiral Sartorius. The sword comes with a Queen Victoria Wax Seal and Scroll to Sartorius 17th March 1869 for his promotion to Admiral. Two of his sons would win the Victoria Cross, Major-general Reginald William Sartorius, and Major-general Euston Henry Sartorius.
Bidding ended. Lot is unsold.
I have a question