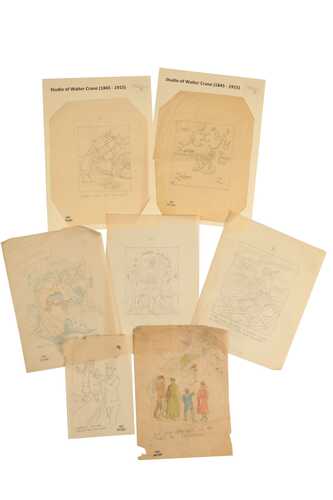 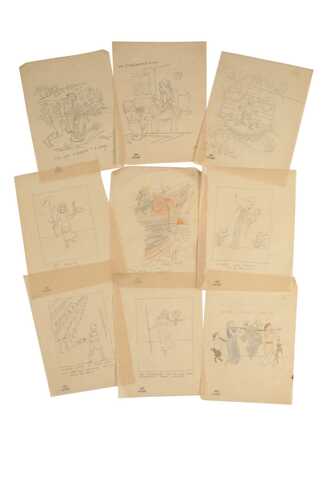 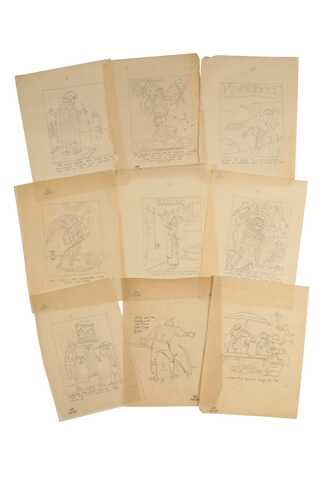 some with colour, each on tracing type paper, most stamped 'Walter Crane Studio', some ppareantly for the 1887 book 'Legends for Lionel' approximately 300 in total

Illustrator, designer and artist Walter Crane trained as a wood-engraver and became a freelance illustrator in the 1860s, while also exhibiting at the Royal Academy. During the 1860s and ’70s Crane’s artistic output was prodigious. He produced hundreds of illustrations and cover designs for Edmund Evans’s cheap yellow-backs, and he designed the immensely popular children’s Toy Books for Evans and for George Routledge. He also designed ceramics, nursery tiles and wallpaper.
Like his friend William Morris, Crane combined a strong social conscience with a design genius that catered to the taste of the Victorian middle classes. Inspired by Morris, Crane took up the socialist cause in the 1880s, first joining the Social Democratic Federation, then following Morris into the Socialist League. He was a founding member and president of both the Art Workers Guild and the Arts and Crafts Exhibition Society. He also had a profound influence on the teaching of art at Manchester School of Art and then as Principal of the Royal College of Art.