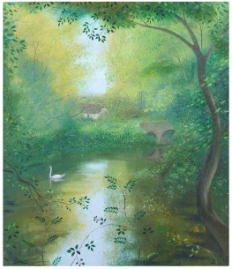 NICHOLAS HELY HUTCHINSON (b. 1955) 'By the Bridge at Bockhampton'

Nicholas Hely Hutchinson
Born in 1955, and studied at St. Martins School of Art and Bristol Polytechnic (Fine Art). Since his first one-man exhibition in 1984 Nicholas has exhibited consistently in London, Dublin and Hong Kong, his most recent being at the Portland Gallery in 2019. His paintings are increasingly in demand and now feature in many private and corporate collections. He has been represented by the Portland Gallery since 1997. A range of cards and posters featuring his work have been published.
Nicholas has two grown-up children, and lives with his wife, and two lurchers in Dorset. He gets much of his inspiration from the surrounding countryside and the coast. He also travels to some of his favourite places to paint – particularly Venice, Paris, the West of Ireland and Cornwall.