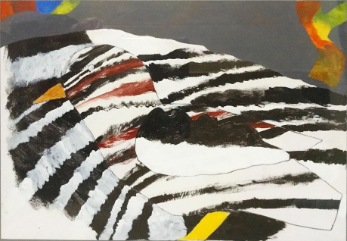 Tim Nicholson
Born outside Southampton in 1939, Tim Nicholson and his family moved to Alderholt Mill House, near Fordingbridge, in 1941, where his mother EQ Nicholson painted with her then lodger John Craxton and friend Lucien Freud. Tim attended Bryanston School and went on to study architecture at the Architecture Association and Thames Polytechnic, but after fracturing his skull in a cycling accident in 1980, he returned in earnest to his earlier passion for painting. Exhibitions followed at Queen’s Elm, Michael Parkin Gallery and Charlotte Lampard Gallery. He also designed rugs, which were made up using the hooked wool technique by his mother and his fellow artist and old school friend Rod Hill. Lives in a cottage near Cranborne with his wife, the sculptor Catherine Row. He has exhibited at Sladers Yard Gallery, West Bay, in 2007, 2010, 2011 and 2015.