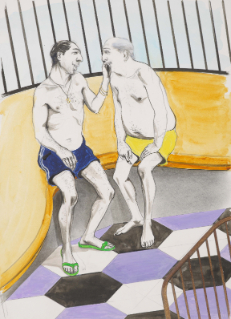 Charles Avery
Born Oban, 1973. Lives and works in London and Mull. Since 2005 Avery has dedicated his practice to the description of a fictional island, which he continually elaborates, describing its population, customs and philosophies, nature and architecture, expressed in the form of large-scale drawings, sculptures, installations and texts. Known only as ‘The Island’, Avery’s wave-lapped realm is not only a vividly realised fiction, teeming with sights both strange and strangely familiar, it also operates as a petri dish in which the artist tests ideas from the fields of epistemology, aesthetics, mathematics, economics, anthropology, architecture, and beyond.