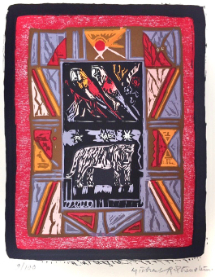 Michael Rothenstein RA
Born in 1908, the son of Sir William Rothenstein; his brother John was Director of the Tate Gallery. He studied art at Chelsea Polytechnic and the Central School of Arts before settling in rural Essex. Rothenstein produced landscape watercolours and drawings throughout the 1920s. In the late 1940s he turned to print making, which remained his abiding obsession.
In the 1950s Rothenstein attended the avant-garde Atelier 17 print studio in Paris and his work was constantly evolving through the 1960s and beyond. He made numerous mixed media prints, often using abstract symbols, and his colour woodcuts and linocuts won international recognition. This, combined with his outstanding lithographs and screen prints, confirmed Rothenstein’s position at the very forefront of the 20th century British printmaking renaissance.