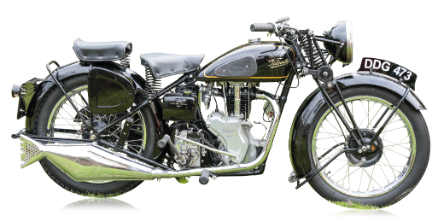 A classic example of British motorbike engineering. The MAC 350 was built by the family run company Velocette, designed to be a reliable single cylinder commuter/tourer. As such the bikes were very popular during the war, and this lovely example has its own unique family history. First purchased in 1939 by a Mr P Bisco, it was then bought by a Mr D G Evans of Worcester. He used it regularly after working as a dispatch rider during the war and whilst courting his future wife. Later he had to sell the bike, his wife's pregnancy encouraged him to purchased a more practical vehicle. The MAC then was passed to a Mr Powell, a local enthusiast. In 1978 the bike was bought back by Mr Evans, who had found the bike, and was instantly captured by the happy memories of courting it brought back. It has since passed to his son. With it's instantly recognisable fishtail exhaust, and classic lines, this bike would only take a  recommissioning service and a few added parts, to be brought back to a lovely running tourer.